Shellac is the refined form of the natural polymer Lac. It is the only known commercial resin of animal origin, being the secretion of the tiny red Lac insect, Kerria lacca, which is parasitic on certain host trees. In India, insects of the Kusmi strain inhabit the Kusum tree (Schleichera oleosa) and produce the Jethwi (July) and Aghani (December) harvests, while those of the Rangeeni strain reside on Ber (Zizyphus mauritiana) and Palas (Butea monosperma) trees and produce the Bysakhi (April) and Katki (November) harvests. The Jethwi and Katki harvests are largely used to provide Broodlac for the main, Aghani and Bysakhi crops which are viewed as higher quality harvests. In Thailand, a related Lac-producing species called Kerria chinensis resides on the Rain tree (Samanea saman), while another species in China is known as Kerria yunnanensis and dwells on Dalbergia assamica. Each Lac insect species inhabits its own host tree species and produces Lac with different colours, chemical compositions and release characteristics.

Female Lac insects account for the majority of the swarm and are the main producers of the Lac resin, the output of which is greatly enhanced after fertilisation by the males. The female Lac insect inserts its proboscis through the bark of the host tree to feed on the sap, which undergoes a chemical transformation into a natural polyester resin during digestion, before being secreted through the pores of its skin. On contact with the air, the secretion hardens and forms a tunnel-like tube as the insect moves along the branches of the tree. These tunnels eventually form a crust over the twigs which serves as a protective shell over the insects, inside which the female lays her eggs. Each female produces around one thousand eggs over its six-month life-cycle, so each year two generations of larvae are hatched. The emergence of the young insects through the shell is referred to as swarming. Although two crops are produced each year, only one crop is harvested per tree. Cultivation involves cutting a bundle of Lac-bearing twigs containing larvae from an infected tree, known as Broodlac, and tying them to an uninfected tree a few days before they swarm. A small amount of Broodlac produces sufficient larvae to thoroughly infect a tree, such that vast swarms of insect larvae smother host trees during brood season.

After the end of the adult insect’s natural lifecycle and the swarming of the new generation out of their protective shell, the now redundant resin shell is harvested by scraping the encrusted twigs, known as Sticklac, before being taken to refining centres where the Lac is crushed, screened to remove any twigs and other impurities before being washed in water to remove the natural red pigment that is sold separately as Lac Dye (Laccaic Acid). Finally, the resin is air-dried and at this point is known as Seedlac due to its grain-like consistency, which ranges in colour, mainly depending on which insect strain produced it and the host tree it inhabits. In general, Kushmi Seedlac is golden yellow, Rangeeni (Bysakhi) Seedlac is yellow to reddish-brown, while Thai Seedlac is dark red. The natural Lac resin is obtained by further processing the Seedlac, prior to it being refined it into Shellac.

Shellac has many environmentally friendly properties, being a natural, sustainable, renewable and biodegradable product. The Lac resin is a complex mixture of alicyclic and aliphatic acids, mainly Aleuritic, Shellolic and Jalaric acids, but also contains Butolic and Kerrolic acids. Seedlac contains approximately 5% wax and two pigments, the water insoluble Erythrolaccin and the water soluble Laccaic acid.

Shellac is compatible with many other resins, additives and raw materials, and has good adhesion properties, allowing it to bond to a wide range of surfaces. It has good film forming properties and when used as a coating produces a glossy finish that resists ultra-violet light and has low water vapour and oxygen permeability, providing a protective moisture barrier. Shellac functions as an efficient taste and odour blocker when used as an excipient coating. It is also resistant to acid and hydrocarbons, making it an effective stain sealer. Shellac is also a good electrical insulator due to its dielectric properties, as well as having a small coefficient of expansion and low thermal conductivity.

Shellac has a typical melting point of between 77-90 degrees Celsius. It is a natural bio-adhesive polymer and when heated to between 120-150 degrees Celsius for a sustained period becomes more viscous and rubbery due to polymerisation, leading historians to view it as an early form of natural plastic. Under heat and pressure, it can be pumped like a thermoplastic and moulded into intricate shapes (e.g. gramophone records) that are insoluble in the usual solvents once cooled.

Shellac is soluble in ethanol, methanol, propanol, formic acid and solvents of the hydroxyl group. It also dissolves in aqueous alkaline solutions containing ammonia, sodium borate (borax), sodium carbonate or sodium hydroxide. When prepared as a solution in alcohol or methylated spirits, Shellac provides a hard, durable coating that is quick-drying and cures at relatively low temperatures. Shellac is insoluble in water, glycerol, palmitic acid and hydrocarbons.

Shellac in edible form is generally recognised as non-toxic, hypo-allergenic and physiologically harmless, as well as being tasteless and virtually odourless. It is accepted as a food additive (E 904) in Europe (EC Regulation 231/2012), the US (Food & Drug Administration 21CFR175.300) and Japan. In the US, Orange (unbleached) Shellac is included in the list of non-organically produced agricultural products allowed as ingredients in or on processed products labelled as “organic” (7CFR205.606). Shellac is also included in non-parenteral medicines (oral tablets and capsules) licensed in the UK, the FDA Inactive Ingredients Database (oral capsules and tablets) and the Canadian List of Acceptable Non-Medicinal Ingredients.

Wax-Containing Bleached Shellac and Dewaxed Bleached Shellac grades are sold in the form of a creamy-white or brownish-yellow powder and are used to produce transparent or lightly-coloured coatings. Wax-Containing Shellac and Dewaxed Shellac is sold in flake form, which can be milled into a powder if necessary. It is produced in a variety of colours, ranging from dark brown (Garnet and Instan) and orange (Sona), to light amber (Lemon), yellow (Blonde and Super Blonde) and pale straw (Platina). The colour is often a key factor in choosing a specific grade of Shellac since it is frequently used as coating material, with the lighter grades being viewed as superior and commanding higher prices. The colour, chemical composition and other properties of the Shellac depend on the Lac insect strain and related host tree, as well as the process used to refine it. Shellac grades based on Indian Seedlac (e.g. Kushmi and Bysakhi) are generally lighter in colour than those derived from Thai Seedlac. The colour is also influenced by the quantity of activated carbon employed to decolourise the Shellac. Small variances can also naturally occur between different batches.

Refining Process
Seedlac is refined into Shellac using one of three different refining methods, the Melting Process, the Solvent Extraction Process, or the Bleaching Process.

Melting Process
The Melting Process produces Wax-Containing Shellac (sometimes called Orange Shellac) and was traditionally handmade, but apart from Button Lac, is now largely machine-made. This type of Shellac is extracted from the Seedlac by melting it using steam heat and then squeezing the molten Lac through a fine metal filter using hydraulic presses. The molten Lac is then stretched by stainless steel rollers into a long thin film before being broken into flakes once cooled. The wax contained in the Lac is not removed by this process and the colour of the flakes mainly depends on the type of Seedlac used.

Solvent Extraction Process
The Solvent Extraction Process produces Dewaxed Shellac (also referred to as Refined Orange Shellac or Purified Shellac). This type of Shellac is extracted by dissolving the Seedlac in a solvent, usually Ethanol. The solution is then filtered through a fine cloth which removes any insoluble matter and reduces the naturally occurring wax contained in the Lac from 3%-5% to 0.2% or less. The solution is sometimes further filtered using activated carbon to lighten the colour of the Shellac. The alcohol is recovered via evaporation, while the remaining viscous Shellac is stretched into a thin film using a roller before being broken into flakes once cool.

All four forms of Shellac are used across a wide range of industries, although their various properties mean they tend to be favoured for different applications. End-users often prepare Shellac as a solution by mixing it with a solvent such as ethanol or an aqueous alkaline.

Wax-Containing Shellac appears milky when dissolved in a solution since it contains around 5% natural wax, but when applied as a coating dries to a clear finish. It is mainly used by industrial users for technical applications.

Bleached Shellac powder appears milky when prepared as a solution due to the 5% wax content, but dries to a clear film. It is frequently used as a glaze or coating in the Food, Confectionery and Pharmaceutical industries, promoting increased shelf life.

Dewaxed Bleached Shellac powder is clear and transparent when prepared as a solution. It has good film forming properties, and provides a high gloss coating with good surface adhesion. Bleached Dewaxed Shellac is widely used in the Food, Pharmaceutical, Printing & Packaging and Personal Care industries as a preservative coating, glazing agent, adhesive and binding agent. 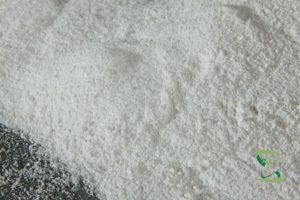 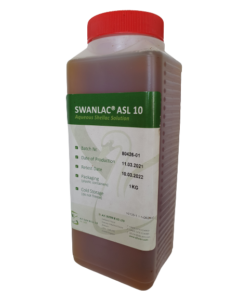 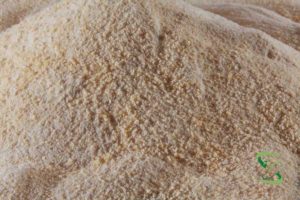 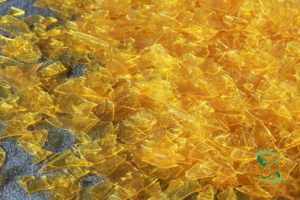 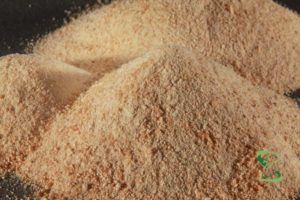 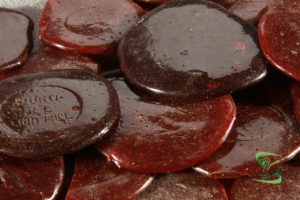 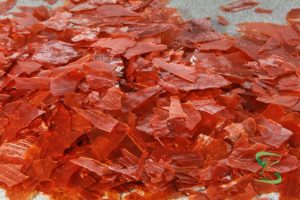 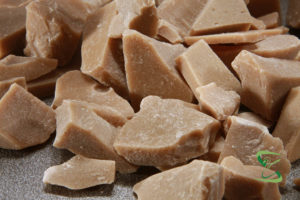